Why can’t we feed the ducks and geese any more? 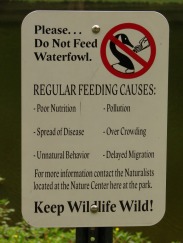 The more we study animals, the more we learn.  The seemingly harmless, age-old practice of feeding the ducks and geese (usually old bread) has been scientifically proven to be harmful, for many reasons:

Malnutrition
Human food, especially white bread, is not part of the waterfowls’ natural diet.  They eat a variety of grasses and water plants which ensures that they get the nutrients that they need.  By filling up on less nutritious food, young goslings are especially vulnerable developmental problems such as malformed wings, which leave them unable to fly.  However, even feeding them cracked corn or ground poultry feed causes other problems.

Pollution
Excess food that is left to decay, as well as the increased feces production brought about by overcrowding, causes quite a bit of pollution.  In addition to increasing the spread of disease, both to the birds and to humans, nutrient overload in the ponds causes noxious algal blooms, which decrease oxygen content in the water.  This can cause large fish kills and also affects other aquatic plants and animals.

Overcrowding
Many urban ponds have enough space and food for only small populations of waterfowl.  Food handouts cause them to gather in numbers larger than the habitat can sustain, which leaves them competing for very limited resources.  The overcrowding, competition, and stress of less nutritious food leaves them more vulnerable to diseases such as avian cholera, duck plague, and avian botulism.  One infected bird can contaminate the entire water supply and wipe out large portions of the population.

Spread of Disease
One goose can eat up to 3 pounds of grass each day, with half of that being deposited as feces.  Goose feces have been found to carry several human pathogens, including E. coli, campylobacter, Salmonella, and Listeria.

Delayed Migration
When waterfowl make stops along their migration route and discover that there is easy food to be had, they will often delay their migration, or even forego it altogether.

Unnatural Behavior
Waterfowl that grow accustomed to being fed can become increasingly aggressive towards humans, especially during breeding season.  They also lose their fear of dangers that they would normally be wary of, such as cars and airplanes.

Keep Wildlife Wild!
If you really care about waterfowl, stop feeding them.  They don’t understand why feeding is a problem, but you do.  You can help out by telling others what you have learned!

For more information, see what US Fish and Wildlife has to say about feeding waterfowl.

Home
Back to FAQ