We have a number of Indiana native reptiles, amphibians, fish, and invertebrates.  Some of our animal ambassadors participate in programs.

Although we do love animals, we are not a rehabilitation clinic.  If you find an injured or orphaned animal, we can give you a referral, but we do not have the experience, licensing, or equipment necessary for true rehabilitation.  Contact us and we can refer you to an appropriate rehabilitator. 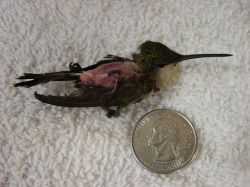 Here is a perfect example of why it is so important to keep your domestic animals inside.  Because we keep them as pets, we are sustaining a much higher number of small predators that would be naturally balanced in nature.  This hummingbird apparently looked pretty tasty to someone's pet cat, which must have been a particularly agile hunter.  She was later taken to a licensed rehabilitator. 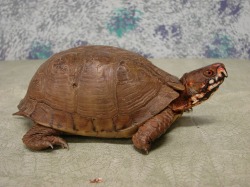 This guy was brought in to us when someone found him on the road.  He had probably been someone's pet, and when they got tired of him, they decided to release him into the wild.  Unfortunately, this is NOT one of our native species--their range goes no further west than Missouri.  The poor guy was probably hopelessly lost, unable to find suitable food, shelter, or a mate.  You can see the large crack in his shell, most likely from car damage, which has since healed.  He also has small tooth marks on the side of his shell which are not visible in the picture.  Wildlife needs to remain wild, and to remain in its home range. 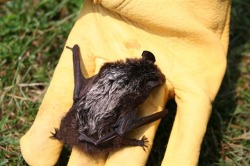 Bats are often brought to us dehydrated, and when we get them rehydrated, they can soon be on their way again.  Such was the case with this beautiful bat.  Notice the silver tips on the fur.  This is one of our species of special concern in Indiana.  Many bat populations are suffering because of habitat destruction, human disturbance of maternity colonies and winter roosts, and a new threat, White Nose Syndrome, whose cause is still unknown. 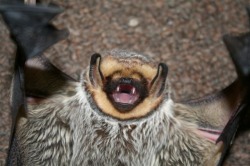 This bat is another of our Species of Special Concern in Indiana, and was another that just needed a good drink before being ready to fly again.